Saturday 23 July 2016 and the Conwy River Festival saw five boats compete for honours in the ‘Nobbies, Gaffers and Classics’ race. ‘Comrades’ and ‘Anna Ellidi’ the local boats were joined by ‘Spray’ from Liverpool, ’Master Frank’ and ‘Phyllis’ who voyaged over from Ramsey and Peel IOM respectively.

Comrades: 27ft fishing Nobby built at Crossfields of Arnside in 1908, owned by Bob Angell.
Anna Ellidi: 39ft Morecambe Bay Yacht built by William Anderson's of Millom in 1912, owned by Cole Manson.
Spray: 32ft built in 1908 by Crossfields of Arnside, she fished Morecambe Bay until the early 1960's then on the River Dee, finally renovated in 1992, owned by Tom Middlebrook. Spray is a regular competitor in the Liverpool and Conway Nobby races.
Phyllis: 26ft Royal Mersey Restricted Class yacht built 1913 and fully restored. Phyllis is the last remaining example of this class afloat using the Lancashire Nobby hull design, owned by Kevin Goulding.
Master Frank: 40ft Isle of Man longliner once used to fish for cod. Launched in 1896 and continued to fish commercially until 1978. Following an extensive restoration by her current owner she is still found sailing off the Isle of Man coast, renovated and owned by Jo Pennington.

The small fleet assembled, after motor sailing against the ebb out of the river into Conwy Bay. The day’s OOD Pam MacDonald’s dilemma was that there was hardly a breath of wind to be found from the bridge of the committee boat appropriately named ‘Rest A While’. The flat calm day was to present a particular challenge to the large heavy work boats in the race as they struggled to make any way. A fresh breeze ensures that once these giants start to move they take some stopping and their inertia can master the idiosyncrasies of any fickle wind. But alas not today.

Comrades was spotted reverting to her heritage, a crew member fishing from the beam, such was the pace of the race. Phyllis chose to try a different strategy and headed in an opposite direction. As the afternoon’s ebb turned to flood the OOD had no option other than to shorten the course. This resulted in Phyllis being treated to a ‘jibe’ which resulted in her turned to face the fleet. Another little pirouette and then she was being closely chased albeit in slow motion action towards the finishing line. High drama at 1 1/2 knots! 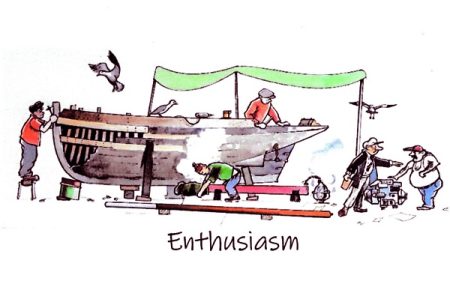